This is a story that I promise will make you smile.  Stay with it until the end…

Some mothers don’t have to do a daily morning safety check throughout their home.  Some moms have daughters or kids that look like Harry Potter and sit and read books all day.  I have three boys that I will have to eventually write a book about or someone will write a book about me once one of their experiments goes awry and I am blown to bits.  My mornings consists of mad chaos while I cook and pack lunches and play drill sergeant.

While wrangling three boys our patient dog stares me down to say, “Feed me!” and “Let me out!” and my husband yells, “Abbie, did you pack me a lunch?” and “Stop yelling yelling at the kids so much!” and “Boys, stop beating each other with pool noodles at the kitchen table!”

You would think that after dropping them off at school I would sit in silence and drink my coffee.

Not in our house.  I have to be sure that our house will still be standing when Jim comes home from work and I am still alive when everyone starts screaming, “When is dinner!”  Boys are also born with two stomachs to accommodate the Hobbits meal plan.

I walk through our home and look for signs of mayhem or hopefully pre-mayhem to nip in the bud.  The house was looking pretty good other than the odd light that they left on.  Toilets were flushed.  Faucets were all the way off. 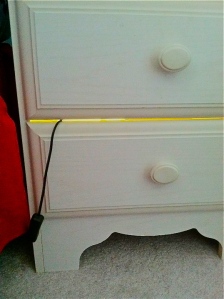 Why would his nightstand drawer be glowing?

Here is where I do that walk that all mothers of little boys do.  I walked with eyes squinted, holding my breath and thinking about the exit strategy to get whatever it is quickly out of the house and thinking about how many more days until the garbage man comes.

I open the drawer and find a Robin’s egg wrapped in a towel and with a reading lamp.

Oh my sweet little Peter.  I had found the egg while out gardening.  It was completely intact and I called him over to show him.  I explained that it had been out of the nest long enough that it would no longer hatch and that if it gets broken chances are it will be rotten and stink.

“But isn’t it beautiful!”  When he asked if the mothers was sadI told him I was sure she had already laid another egg and these things happen when eggs are up in trees.

I kept on gardening.

A little while later he came outside and asked how long you would have to sit on the egg.

I patiently told him that if he sat on the egg it would break because he is not a bird and reminded him that it was old and would never hatch.

Then he came out and asked how warm it would have to be.

I told him, “So help me Peter if you put that egg in my microwave!!!!”

He snickered, “I am sure.  Like I would do that.  That would cook it.”

I thought that was the end of it.

Until I found the night stand incubator.

When he came home from school I told him I found his little experiment and while it was very smart and sweet I told him he is lucky he didn’t burn the house down.

His reply (said with a minor head shake and slow blink that all little boys do to their mothers), “That is why I used an LED cool lamp.  I am sure, like I would use a regular bulb.  That would catch on fire.”

Here are some more stories…

I can prove it…I have pictures! (allthatmakesyou.wordpress.com