“Do you want to go to the Van Halen Concert?” my husband asks me over the phone a couple of weeks ago.

I am thinking about where I will be at mentally Saturday with the three boys and the never ending “hillbilly hand-fishing” swamp clothing I have been washing and and say quickly, “YES!”

Then I scramble, as I have to act like I know something about Van Halen.  I need to be worthy of a big night out.  Like, I know that I have listened to a lot of Van Halen and that they were a hair band from the 90’s.  The music all kind of runs together for me.  It’s the music we listened to while drinking crappy beer, down a country road with a make shift bonfire during my teen years. It doesn’t matter!  Mamma needs to get the heck out of the house.

“Oh yeah, your right.”  Jim sounds impressed that I could rustle something up to say.  He knows me so well.

“Well you better be careful he doesn’t try and scoop me up because I am totally his type!”

I am already thinking about getting “The Pants” out to wear.

I have these pants my sister bought me somewhere on clearance as a joke.  I showed her.   I wore them to her bachelorette party ten years ago. They are awesome.  They are python and plastic and PERFECT for a Van Halen concert.

And they are lucky.  Not in a “get lucky” way but in an even better way.

They are my Lucky Brush with a Rockstar Pants.”

They are the pants I had on when I could have thrown caution to the wind and run away forever with a famous rock band. I even tell my kids the story.  It is good they know I have options.  They even know I was married at the time AND they were already born.

These kids have to hear it every time one of their songs come on the radio and my kids friends moms have to hear my kids tell the story when it comes on in their SUV.

These pants have made me a legend among sixth graders, in my community, on my street and living in my house.  That is why they are better than a “get lucky” anything.

You usually don’t get to tell a sex story on a mom blog but my lucky pants are giving me, yet another, chance to tell the story about how I almost ran away with…

Don’t be a hater.  You know your just jealous and I am pretty sure at least one of them has “A Millions Dollars” by now.

It was Toledo, Ohio and I had orchestrated my sisters “Princess Barbie Bachelorette Party Bus.”  We were club hopping in the “Glass City.”

We ended up at a Banana Joe’s.  It is the kind of fine establishment that ENCOURAGES dancing on the bar.

I don’t know about you but I was sick of people telling me to “get down” off of bars.

So there I was rocking my python print pants and bronze high heels on the bar and the DJ starts playing, “If I had a Million Dollars.” by “The Ladies.”  It was a different version than the song you hear on the radio.  I was the only one who knew the words.  I knew the words because I had recently walked in a walk-a-thon and won a radio station copy of one of their CD‘s with live cuts on it.  The same live cut of “Million Dollars” that they were playing.

During the song a guy called me down off the bar, (here we go again, I thought I could dance on the bar here) and asks me how I know the words to this version and he asks me to come and hang out with him and his friends. He points over to a table in a corner off to itself by the bar and the group of guys waved me over.

Just then I realized the bachelorette party needed to book it out of there.  I had an entire night of bar hopping and the next club was holding parking in front for us to pull up in the “Barbie Bus!”

I told the guy he was too cute and his friends looked really nice and that normally it would be fun but I had to go with my group.

I said, “I’m soooo married and I have twin babies at home and y’all are too sweet.” Then I hear someone yell, “Oh my God it’s the Bare Naked Ladies!!!!” and everyone looks and points at the table of the “too cute, super sweet guys.”

HE IS A LADY AND THE REST OF THE GUYS WERE LADIES TOO!

I walked towards the piano bar at the entrance where the “Barbie Bus” is waiting out front for us. But first…

danced to one last song!

These pants are legendary! I dug them out and tried them on. 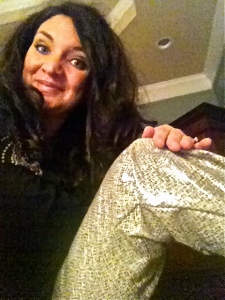 Have you saved an article of clothing just because of fond memories.  What luck has it brought you?