I have never “lost” a child when we are out and about.  I know it can happen easily and I also know we have been fortunate with three boys and twins to boot that it hasn’t, yet.  it is common knowledge, to parents of twins, that they only run in opposite directions.  If you ever see a set of toddler twins with their ankles tied together, don’t judge.  I knew our youngest wasn’t really, “MISSING!”

I had taken all three boys to one of those club membership stores.   While my twin eight year-old boys, (at the time) always stay close to me and the cart our mischievous little brother, Peter, needed to sit in the child seat in the cart.  As always, Peter pleaded to “walk like a big boy”   At the end of the trip I decided we needed paper towels AND toilet paper.  Now if you know the size they are at the club stores you know there is now no room for Peter in the cart, and so his wish was granted.

As the three boys were walking in front of the very erect cart towards the front of the store I looked over to see that Peter had taken off down the furniture aisle.  I kept walking as I saw him turning to the next aisle where I planned foiling his test on freedom.  When the older boys and I reached the next isle we realized Peter wasn’t there! 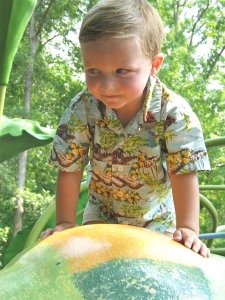 Avery and Mitchell became completely frantic and I went back again and began calling his name, LOUDLY.  No response from Peter.

I walked straight up to the front of the store, abandoning everything and the cart, and has the manager close off the exits.  All of the store employees are looking for him or at least made aware there was a missing child.

Now, in our defense, we have never lost a child anywhere.  We have never even lost a twin when they were small.  Never.  I knew he wasn’t lost or kidnapped.  This is Peter after all.  The kid that walks around with his older brothers holding him by the back of his collar.  The kid that has two older brothers not letting him do anything because they don’t want him to get hurt or go missing or have any kind of fun.

Within three minutes of being “lost” I heard an employee say, “I think I see him!” while looking way up at a couch on the second shelf of the furniture isle.  That little booger had a front row seat high on a shelf, (see picture to the left of him rock climbing) on a micro suede $599 sofa watching all of us run around looking for him…silent and smiling, (see picture above that sums up his personality.)

It took a long time to get Avery and Mitchell calmed down.  They were absolutely beside themselves.  Their sweet little hands were shaking, they were crying and they genuinely thought their baby brother was lost forever.  After paying for the cart of groceries and trying to make eye contact with all of the people who helped us get our happy (beaming with a million-watt grin was more like it) Peter back we finally pulled out of the parking lot.

Mitchell, says in a completely exasperated tone,  says “That is exactly why we should not go there.”

Avery answers back and says, “We told you we don’t like to go to that store Mom!”

Mitchell replies, “It is sooo dangerous!”

I respond with, “What are you guys talking about?  It is just a store!”

Avery says, “You know!  All those kids that have gone missing in there!”

Mitchell, “Yeah, you see them every time we leave.  All those kid’s pictures by the exits.  The sign says “MISSING!”

And so it was every time we went there they held onto one another.  They were terrified.  They thought all of those children had gone missing in that VERY store.  Gone forever.  A child’s mind is a scary place. 😉 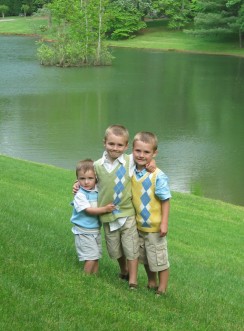 Have you ever lost one of your kids?  Did it scar them for life?  Were you or the kids ever able to laugh about it?  I always wrote our phone number on our kids arm if we went to Walt Disney World or very public place and they weren’t old enough to know our phone numbers yet.  Any tips you have for new parents?

22 thoughts on “Child Is Missing. The Store is Eating Kids Again.”