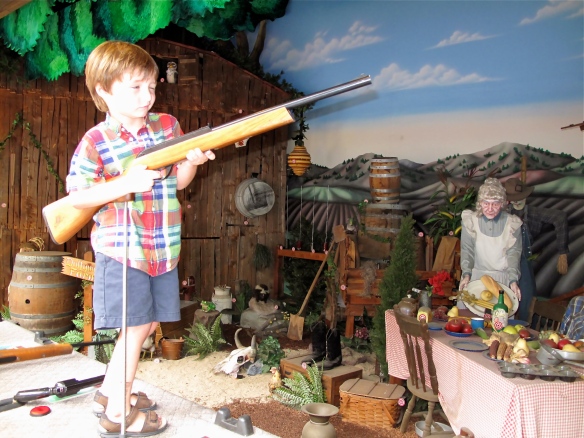 Peter is a sweet boy and a handful, as he always knew far too much for a preschooler.  He can be dangerous to small children as he is always around big kids.  He was invited to a party one summer with other children in preschool.  God has a sense of humor and we know this because when something that should probably not be said out loud, in a large group of people, somehow everyone stops talking all at once…and that one thing, that one that should not be said, is heard and heard by everyone.  That is exactly what happened.  During the loud post “Happy Birthday” singing and waiting for the cake and ice cream suddenly…silence.  Then you hear Peter’s sweet raspy voice loudly and clearly say, “Well, I know what bad words are.  I know that I can say beaver dam but I cannot ever say D@mn beaver!”  That is a lesson for us all!

We were all having our bowl of ice cream and hunkered down to watch “The Voice” a couple of weeks ago after holding the DVR season premier over three little boys heads all evening and they were so excited as they love all the judges. At one point one of the judges jokingly called another judge a “bast*rd” for swaying a contestant to be on their team. One of the older boys (keeping the admission of guilt anonymous to protect him;) snickers, “Ha ha you bast*rd! Ha ha! He called him a bastard!” JR and I just stare at him with a look of WHAAAT??? Then JR says, “You can’t say that!” then our sixth grader says, “What? Why? Bast*rd?” Peter and I are curled up in a blanket to keep away the ice cream shivers and hiding our laughter. JR says, “Stop saying that! It’s a bad word!” 12 years old, “Oh my gosh! It is I had no idea! I have been using it like crazy! I have been calling all the kids at school it! Oh my gosh…I called my teacher a bast*rd! No wonder she was laughing at me…that why all the kids are laughing when I say…your such a bast*rd! Oh no!” There is no blanket that can contain JR’s, mine, Peter’s and the other 12 year olds laughter! Then the laughing (other) 12 year says, “I have been using it like crazy too!”. Where have we gone wrong with the bigguns? 😉

Do not read this if you are feeling sensitive or are a “Judgy Judy” or if you don’t have a sense of humor. Story below and if you dare please keep in mind they are still babies that are learning things in middle school.

Last night we were all in the kitchen. Family banter all around. Then I hear one of the kids call the other a “fa&&ot”…my head spins around…I don’t want to ask what he said in case it was “maggot” and then it will lead to the question, “what did you think I said, mom?” But I have to ask.

Two weeks ago they were calling each other “ba$tard” and when we were like, “whoooooaaaa!” they were mortified it was a bad word and mortified they had called other kids it thinking it was funny and WAYYYYYYY mortified to admit one of them called a teacher it. Clearly they used it wrong and the teacher just laughed at him probably realizing he doesn’t know its a bad word.
Ok, so I ask and I get a nonchalant answer… “fa&&ot”. I shriek. Ba$tard was halfway OK.  I mean it wasn’t like they said ret@rded. They stopped ba$tard it as soon as they found out it was a bad word. This is NOT. I repeat the entire conversation about it being a bad word but I emphasize this is a VERY bad word. They are, again, mortified. “But we didn’t know. We heard it from our friends! I thought it was just a silly word. YOU NEED TO GIVE US A LIST OF ALL THE BAD WORDS!”
OK, I am the same mother that wouldn’t teach my three boys the proper word for a woman’s anatomy. I know that sounds old fashioned. It’s not that. I am certain I will be on a reality show one day. Not the star but the poor mother that the “stars” are blowing up fireworks in her bedroom in the middle of the night. You give these three boys the “V” word and they can easily slip it in after, “You’re a giant______”
A list of all the bad words?  Are they crazy!
I say, “I prefer to just handle it this way. Just ask me next time when you hearr a new word the kids are calling each other at school,”
I asked for it…”What is a H@ mom?” Seriously where is my husband at?  I say, “That TOO is a bad word.” One asks, “Well what does it mean?” I say, “Someone thats had a LOT of boyfriends.” and wink at the older boys with a head nod.
“OK, then is BobSaget a bad word too?”
For real? They are either calling each other Bob Saget at school these days or I didn’t hear it right. Did I ask them what they said again? NO!  I just said it was not.  I am trying to catch “hard of hearing” to avoid any more of this.
If you like this story.  Please follow my blog and share. I’m new and totally need attention to justify not cleaning my house.  Besides, if I know people are reading I feel the pressure to plunk these all out.

soooo desperate!  Oh and they are really polite boys…everywhere else but home.

2 thoughts on ““I know what bad words are! I know I can say beaver dam but I CANNOT ever say d@mn beaver!””